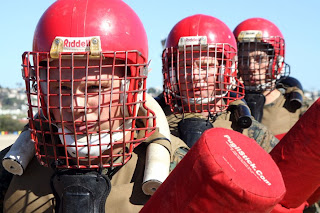 
After a two-on-one match up, recruits faced off one-on-one until a kill strike was received or a fighter fell off their platform. The platform is only a couple feet wide and forces recruits to engage one another head on. The floor on both sides are cushioned to prevent injuries.

From an outside perspective the exercise could seem barbaric and without purpose, but that was not the case and both drill instructor and recruit would argue different.


Prior to each bout recruits were checked for mouthpieces, gloves and fitting headgear. Techniques such as the butt stroke, vertical and horizontal slash, and high and low blocks were taught and demonstrated. The entire exercise including the bouts spanned approximately two and a half hours.

“Pugil sticks gives recruits confidence to get over the fear of fighting,” said Hutson. “For others who have fought before it gets them used to hand-to-hand combat.”

Besides the obvious hand-to-hand combat techniques practiced such as butt strokes, some recruits thought the introduction to controlled aggression was important as well. 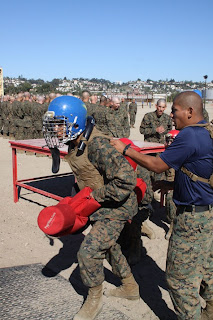 “This is organized, we’re learning how to use offense and defense,” said Recruit Ryan P. Ogletree, Plt. 3210, Co I.

For some recruits learning the defensive maneuvers proved useful as early as their first pugil stick fight.

Recruit Daniel Pineda, Plt. 3210, Co. I said his first pugil stick fight was against a much taller opponent with longer arms but because he used the defensive techniques he was able to overcome the height disadvantage.

“The defense helped me a lot when he was attacking wildly,” said Pineda, who is 5 feet 5 inches tall. “It was a challenge because he was taller, but it was exciting.”


Pineda explained that there is a lot of nervousness before the fight but nervousness is perfectly normal in that kind of situation.

“It’s like my old coach told me, ‘there is something wrong with you if you’re not nervous before you fight. Everyone has a little (nervousness) something before a challenge,’” said Pineda.


While looking over the exercise Hutson made it clear that although the exercise is intense, it is very much controlled and serves as a confidence builder in recruit training.


“We take a lot of precaution. After the first ‘killing blow’ we blow a whistle. The matches last about 10-15 seconds, it’s not like they’re 30 minute fights,” said Hutson. “People may see photos of this and say, ‘Oh my gosh, but they’re wearing mouth pieces and gloves.’”

As more and more recruits finished their bouts and lined up in formation it was evident from their grins on that the training not only taught valuable hand-to-hand combat techniques but also improved recruit morale.