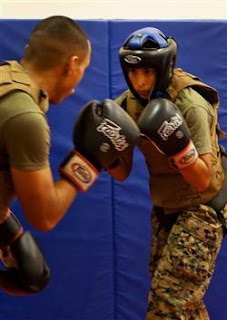 It was 8 a.m. and the company first sergeant was not sitting at the company office. Combat camera Marines weren’t at their usual desks in the basement of Building 1 here, taking work orders for U.S. Marine Corps Forces, Pacific. Pacific Command was missing a Marine noncommissioned officer. They weren’t the only Marines away from their usual work spaces.
There were 21 Marines and one Sailor going blow for blow in the Marine Corps Martial Arts Program room here Nov. 16 as a part of a MCMAP class, Nov. 14-23.

The Marines who chose to participate in the course arrive every weekday morning to be told what their training will entail, anything from conditioning exercises to sparring. During the course, they are tested physically and mentally. 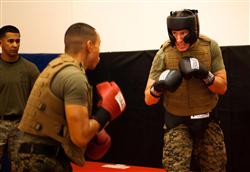 “[The purpose of the program is] to get the Marines into a combat mindset and to develop physical, mental and character discipline,” said Santiago.

Santiago has been an instructor since March 2011 and has enjoyed teaching the martial arts program to Marines of such a variety of ranks. He said the diversified ranks in the room are something you don’t see all the time.

The students, at different stages in their Marine Corps careers, vary from young lance corporals to lieutenant colonels. They all have one thing in common; they are excited to train and move up a belt.

“The students actually get excited to learn new moves,” Santiago said. “Seeing smaller opponents use techniques on an opponent (much) bigger than them … really makes my day.”

When Marines arrive at the training room, their ranks, size and gender are left outside. Levels of intensity and aggression are all that count when the Marines are on the mats in flak jackets and boxing gloves exchanging punches. 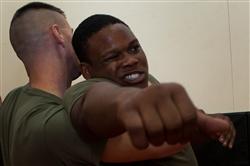 These warriors come to the training area for different reasons. Some have a strong fighting spirit and use the program as the chance to get into a tangling fist dance with fellow Marines.

“I like coming out because I get to fight instead of working at a desk all day,” said Lance Cpl. Christian A. Cox, a combat lithographer at the MarForPac combat camera section. “You know I am aggressive so that’s the best part for me.”

Other Marines take the scheduled class to get their recommended training done.

Because Marines need the training, Santiago is trying to schedule another course for December and plans to continue running MCMAP courses every month.

Santiago recommends the program for any Marine who needs to move up in their MCMAP belt or just wants to learn fighting techniques.

“Come out, it’s fun,” Santiago said. “You’ll have a good time and get good (physical training).”